I do realize that this blog has been sorely neglected lately, though I assure you, it's not because I haven't been doing anything in the sewing room! It's just that it's been a lot of modern/everyday clothing, stuff for my house, and knitting galore. And some historic costuming, but since it's mostly a TON of patterning and mocking up, it's nothing I feel is interesting enough to share! (Except for my recent 1954 "Knights" circle skirt, if you want to count 1954 as historic! I blogged that project on my other blog, and you can see the finished skirt here). Additionally, I've had some non-sewing stuff going on, such as a new job and a new kitten, bringing the total cat population of my household up to three. Craziness! ;)

Long story short, I am over-due to get back to some historic costuming, and not just patterning and mock ups, for once! In fact, I am about to (hopefully) put the finishing touches on a Regency bodice pattern today. This pattern is of my own invention, and is intended to be an awesome, perfectly fitted "base" off of which I can draft any other Regency things I want to make. I have the tiniest bit of tweaking to do to the sleeve and the point at which it joins to the bodice, and then I think it will be ready to go, which means I can finally start on a dress to wear to the Massachusetts Costumers annual Regency picnic!

I'll be hand-sewing this dress, which will made of white dotted swiss cotton. It will close in the back, and have short puffed sleeves with detachable full length sleeves. Or, it may end up being a bib-front, and/or have plain full-length sleeves. We'll see! 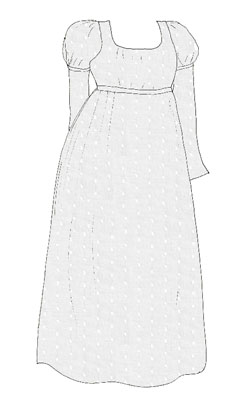 I found some lovely peachy coral beads that I want to make into a three-strand necklace, using this gold-plated clasp. I've seen a few surviving necklaces from this period that use a clasp that appears to be similar to this (although I don't have any to study in person, so I'm just guessing based on photographs) and I think it will be a nice change from the single-strand necklaces I tend to make! 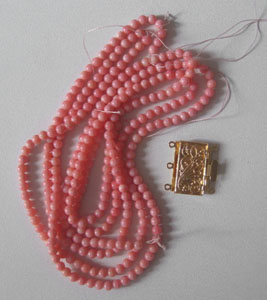 I was tempted to go all out and make a new bonnet and reticule, perhaps in a peach/coral silk taffeta, but I have some other projects in the works so I think I'll stick to the dress and necklace, and probably wear my Lizzy bonnet, which I've not yet had the chance to wear. The peach/coral accessories can always be made for next year's picnic!
Posted by Jenni at 10:56 AM No comments: