2015 was such a crazy, full year! Some of it was bad (like one of my classes this semester, with a teacher who was hell bent on trying to fail everyone) but most of it was good (like finally upgrading to a baby grand piano!) I didn't do a lot of costuming this year (just the 1920s ensemble early in the year, the sheer Regency bonnet and red reticule over the summer, and a bit of patterning and fixing/re-fitting here and there throughout the year), and I only sewed a few everyday wearable items, but I still managed to somehow average more than three finished items per month! The majority of this was weaving and miscellaneous doll and craft projects. The weaving and small projects were easier to manage without neglecting school!

I also managed to learn a lot of new stuff this year! For one, I finally converted to continental style knitting. This was well worth the effort, because I can knit so much faster now, and switching between knit and purl stitches is a dream! No regrets on this one! I also made my first foray into quilting, finally got around to trying out using seam tape to bind inner edges (and this is now my favorite edge-finishing technique), and expanded my embroidery skill set to include sashiko and crewel embroidery (which are really just variations on the basic embroidery theme!) I even managed to work in a little jewelry-making, both out of necessity (needed specific stitch markers and a commute-friendly way to count rows, so made beaded stitch markers and a row-counting bracelet) and for fun (a fabulous 18c-early 20c stone necklace, which I'll blog about some day soon!) But by far the most exciting thing I did this year was go insane with weaving!

I bought a rigid heddle loom last fall and made a simple scarf on it, but wasn't until the summer of this year that something in my brain exploded and suddenly I had to weave ALL THE THINGS! Some of it, you've already seen on my blog, and I have several more scarves and projects to post about, (including my first adventures with pick-up sticks and double heddles), but most importantly, I learned to use a floor loom!!!

For the past three months, I've been taking a weekly class at a local weaving studio, and I've been making tartan!!!!!

The loom I was assigned was big and old, and exactly my cup of tea! 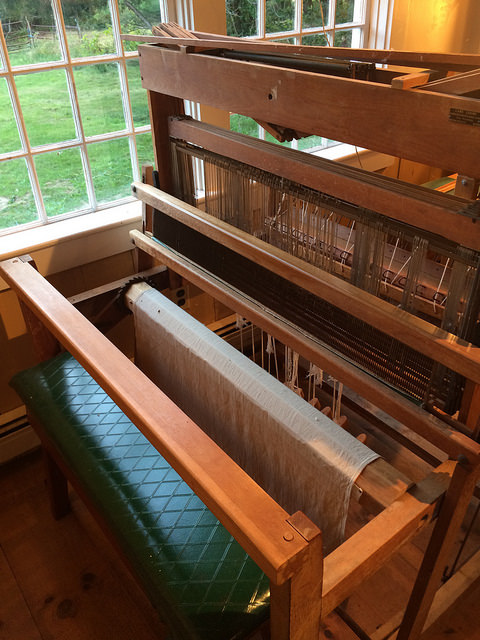 First up, warping on the warping board! 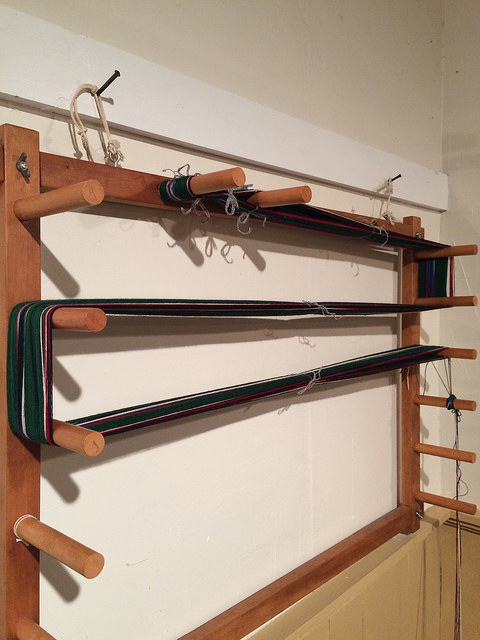 Next, the hundreds of ends went on the loom and had to be pulled through metal eyes in a specific order. This took forevvvvvver! 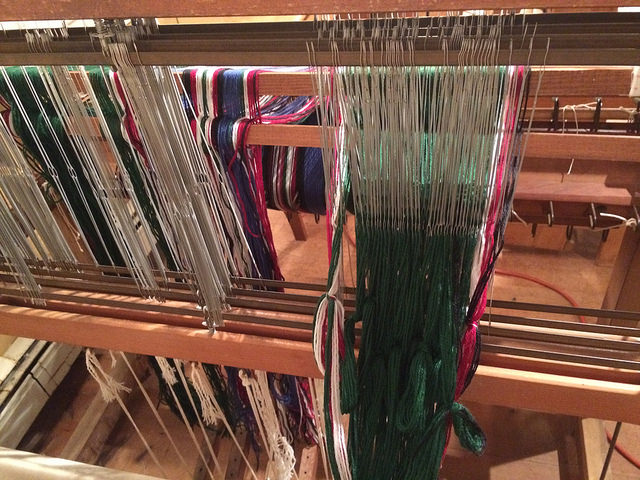 From the back, you can really see the pattern coming together. . . 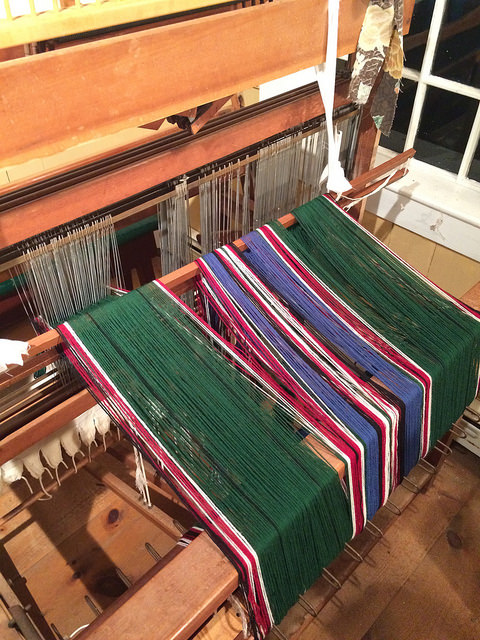 And then. . . Pulling all the ends through more slots! 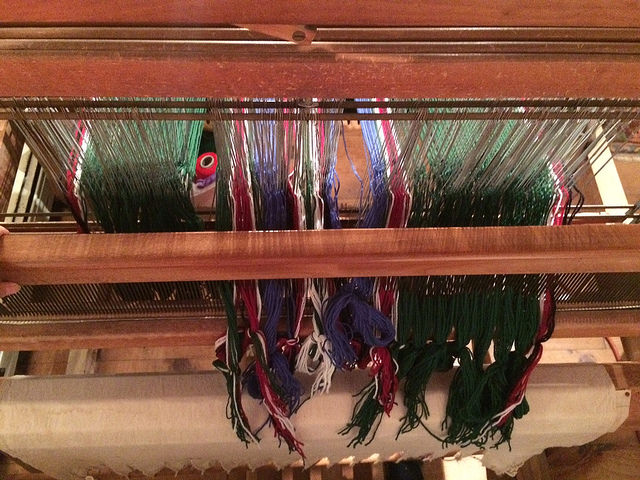 Finally, it was time to tie the ends onto the front rod. . . 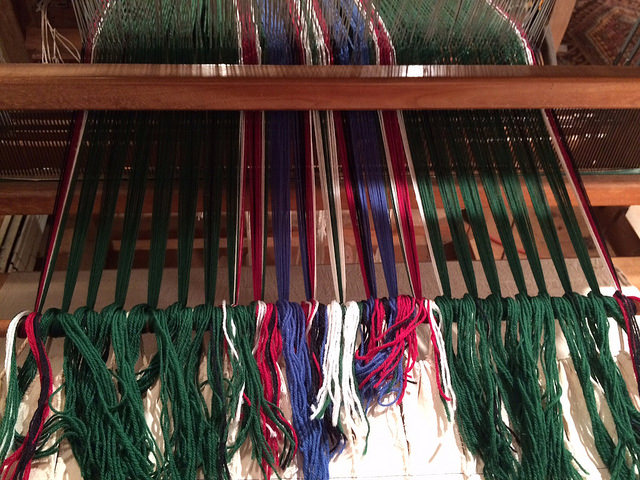 And at long last, weaving! 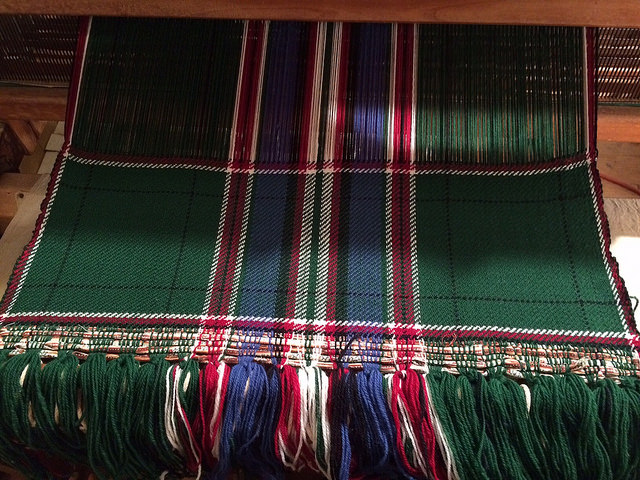 It didn’t take long for me to find my groove with the weaving, and then I was zooming along! 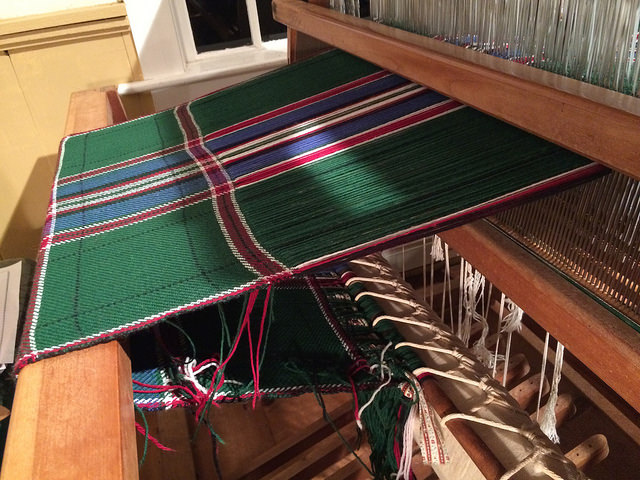 And in no time, it was off the loom! 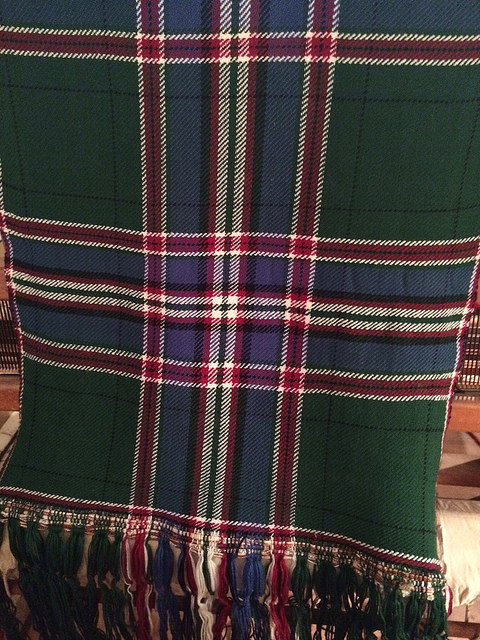 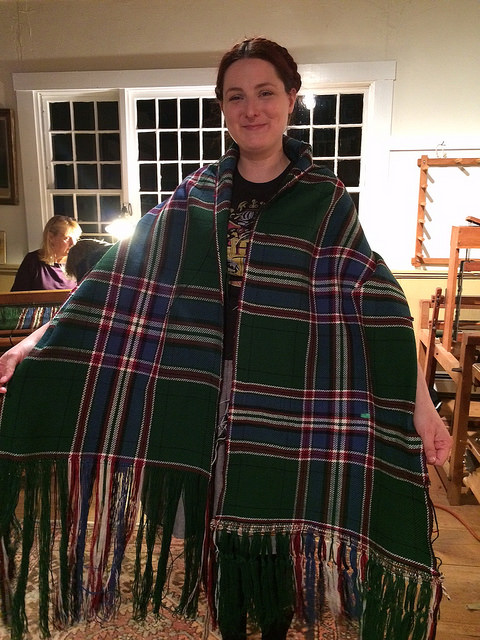 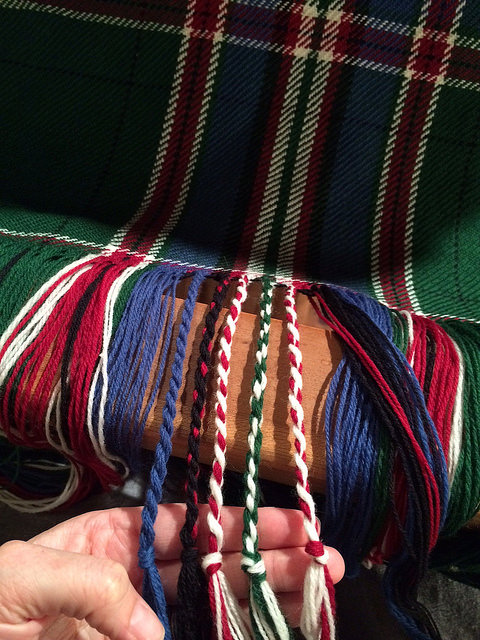 I’m sorry to say, I haven’t quite finished it yet! I managed to twist the fringe along one side, but I’ve yet to do the other side. Holidays, then a family wedding, and now another holiday slowed me down a bit (but all good reasons to put the project aside, of course!) but hopefully I’ll complete this project this weekend!
Posted by Jenni at 7:16 PM 8 comments:

I'm currently pulling together my ensemble for the holiday tea, I'm reminiscing about my last Regency-attired adventure, which was a tea and croquet event at the Warner House in Portsmouth, NH. I realized I have not yet posted pictures, so, here we go! 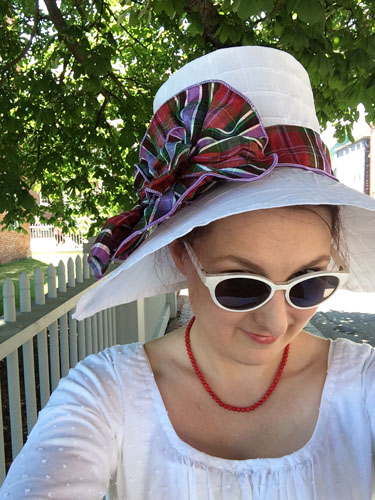 First off, I got it in my head that I wanted to make a sheer or semi-sheer bonnet. I saw one in a still from the movie Bright Star, and I simply adored it! After quite a bit of messing around with different sorts of glues and stiffeners, and a fair amount of patterning as well, I finally got a shape I was happy with. Just before popping in the car to head up to Portsmouth, I had my husband snap some pictures of my untrimmed bonnet. . . Here's one that I liked (except for the fact that the back of the dress is a bit unfinished, as I gained weight since the last time I wore it!) 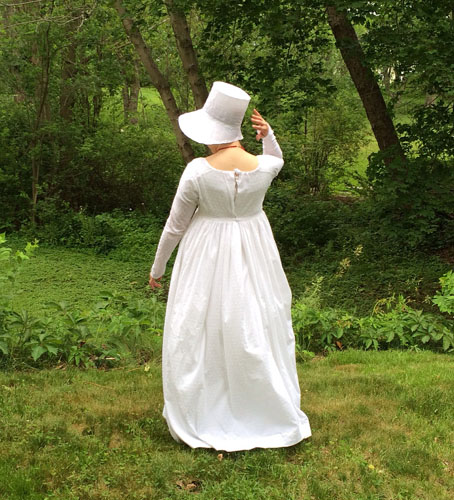 Once in the car, I set to the task of trimming the bonnet. I had some really fabulous plaid silk ribbon that I'd been hoarding a while, and I thought this was the perfect opportunity to use it! 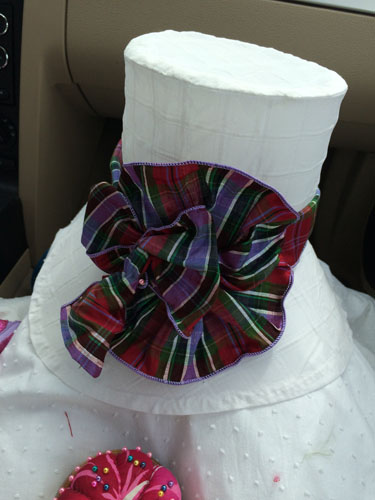 I also managed to make a quick reticule in the car. I'd cut the pieces out before I left just in case I could manage it. It's even lined. I just wouldn't be me if I weren't trying to overchieve at the last minute, ha ha ha! 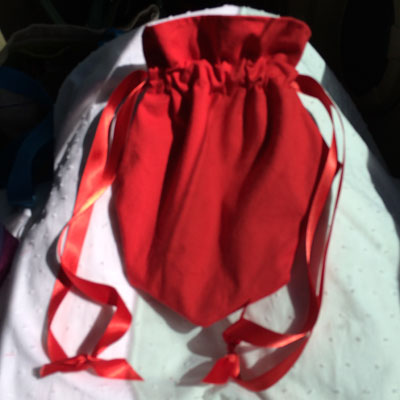 I went with red because I'd recently bought some fabulous new red boots!

One of the main events of the day was the croquet game! I should mention from this point forward, all the pictures are shamelessly stolen from my friend, Sarah, who is in the pink dress. Apparently, I only took a few shots that day, but her husband was creeping us with the camera all day, and I'm really thankful for that! 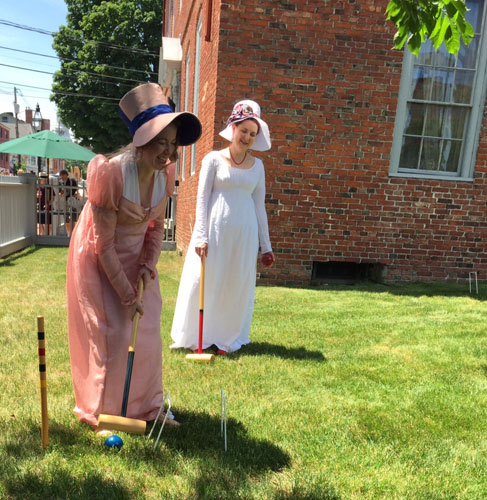 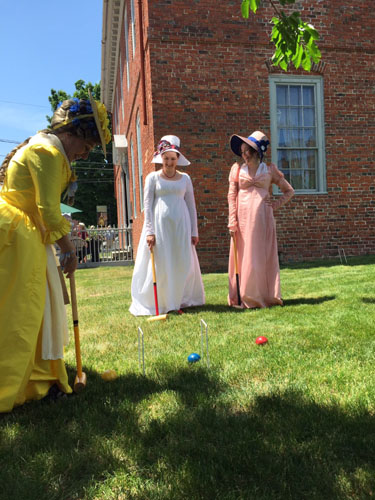 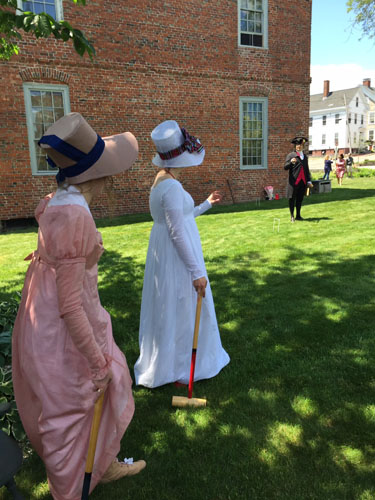 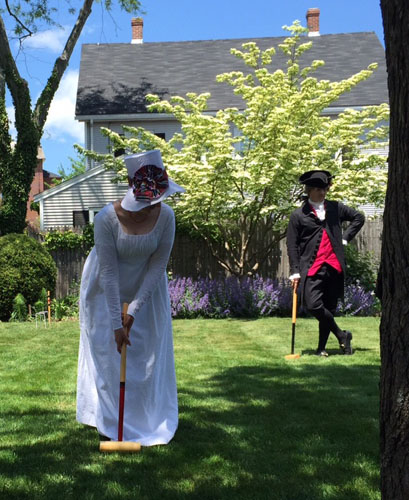 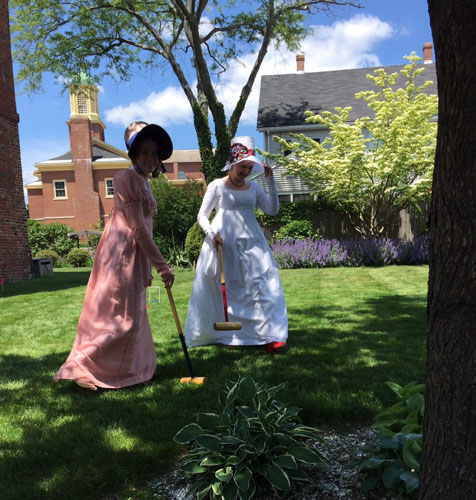 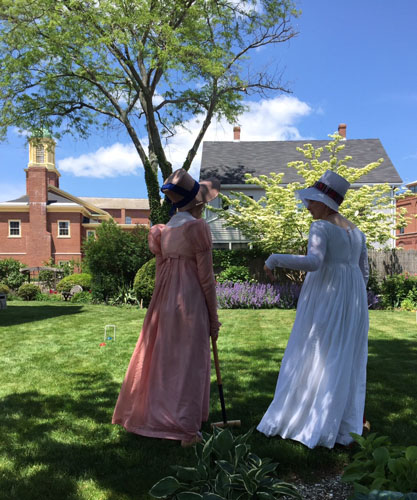 We have some weird traditions, like this sort of thing. . . 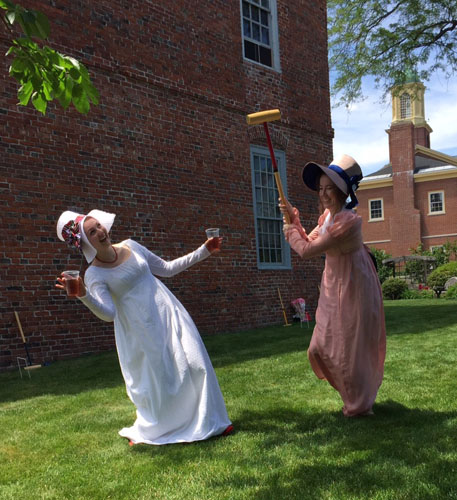 But I promise, we really are good friends! ;)

And of course, there were some posed pictures as well. . . 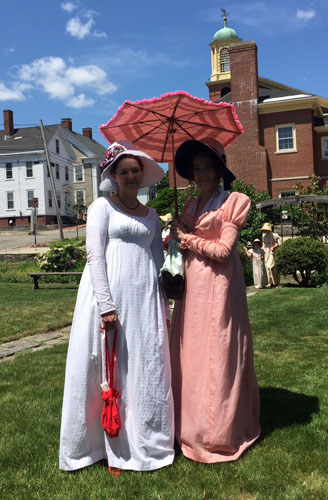 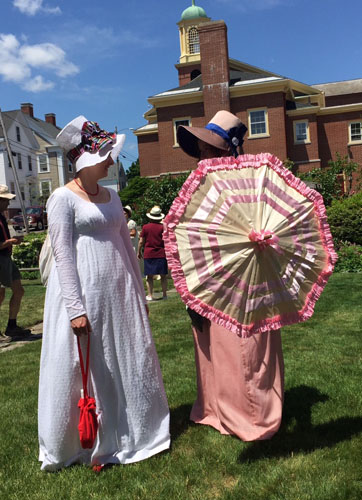 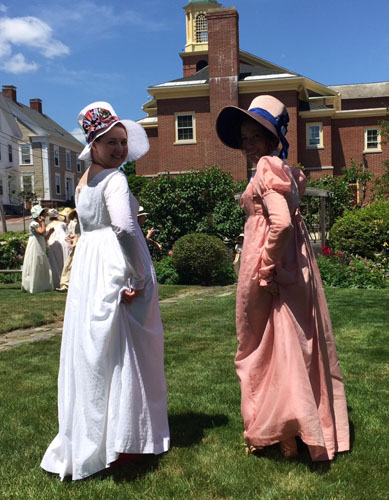 There were actually quite a few ladies in Regency at this event! They were all so friendly, and very nicely dressed. It was nice to be in such good company! All in all, this event was fabulous! Everybody was great, and the house is seriously amazing. If you're in the Portsmouth area, you should really check it out! The smalt-walled room is probably one of the most fantastic things I've ever seen in a period house.

I hope they'll have this event again because I would definitely attend!
Posted by Jenni at 7:39 AM 6 comments: