At long last, the bonnet is finished! And I am super happy with how it turned out! Now I just need an event to wear it to. ;) 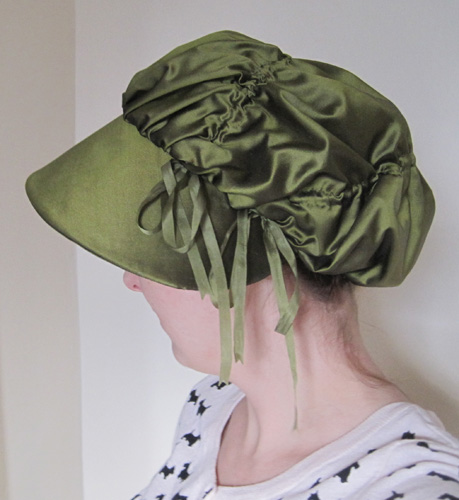 And, this satisfies the Historical Sew Fortnightly Challenge #2!

The Challenge: Challenge #2, "UFO"
Fabric/Notions: Green shot silk taffeta with olive green Kona cotton lining, green silk ribbons, green silk thread, buckram, millinery wire, flannel. . . I think that's all of it!
Pattern: Of my own invention.
Year: Not specific to a year; let's just call it Regency.
How historically accurate is it? It's based on one in a movie, so who knows! But, I did completely hand sew it and avoided synthetic materials as best I could (who knows what's in the buckram though), so in that way it's historically accurate!
Hours to complete: I didn't keep track of this. . . I patterned it in the summer of 2011 and then worked on it off and on (more "off" than "on," LOL!) from then to now.
First worn: Does taking it on and off throughout all stages of making it count? And then wearing it around my house the day I finished it? Because other than that, I have yet to wear it! ;)
Total cost: I can not recall because most of what I used had been in my stash for a while.
Posted by Jenni at 2:34 PM 8 comments:

My first finished historical item of 2013!

I'm sorry to say that I've barely sewn anything this month. . . But not sorry to say that I have been knitting up a storm! And just yesterday, I finished these 18c mitts, from Gloria's excellant "Taylor" pattern (but with some small changes, like making them a bit narrower). They don't get a page on my web site because they were a gift for my friend Sarah! 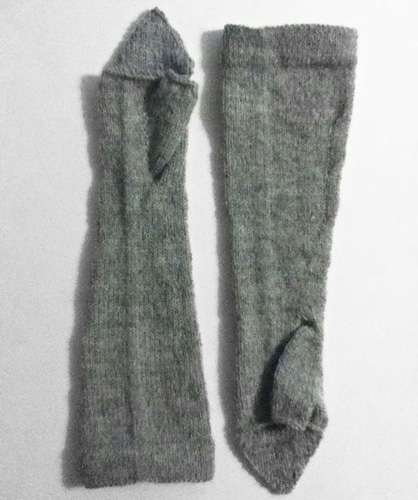 And actually, 100% of the sewing I've done this year has been accomplished at Sarah's house, during two sewing meets. I'm about 98% of the way done with one of my 2012 UFOs (the Lizzy bonnet), which I'll be finishing and posting about later today, if all goes well. . .

Which brings me to my next topic of conversation. . . I think I'm going to jump on board the Historical Sew Fortnightly bandwagon, albeit a little bit late! These two projects will satisfy the first two challenges. . .

Challenge #1: Bi/Tri/Quadri/Quin/Sex/Septi/Octo/Nona/Centennial
Well for this one. . . Sarah's mitts! They're meant to be 18th century, and can work into Regency, so let's just call them 1712-1812 and say I met this challenge (just a little bit late). ;)

Challenge #2: UFO
This will be my Lizzy Bonnet, my UFO from 2012. . . As of the end of last year, it was sitting around just being a covered brim, plus a crown that was partially prepared to be attached. . . And now it's a little strip of binding away from being done! Stay tuned. . .
Posted by Jenni at 9:16 AM 2 comments: