It's a little silly in my sewing room right now. . .

Well, the long story short is that I used old measurements for Glenn and the mock ups I assembled today were not a good fit. It looked so ridiculous - especially since the shirt has no sleeves yet - and I can't recall when we last laughed so hard! So I'm not sharing pictures of that with you, but I did go ahead and have some fun modeling the pieces for you myself. Over my modern clothes. I'm very silly today, I know. . . But if you don't laugh, you cry, right? Anyhow. . .

I call this one "Proud Mr. Darcy": 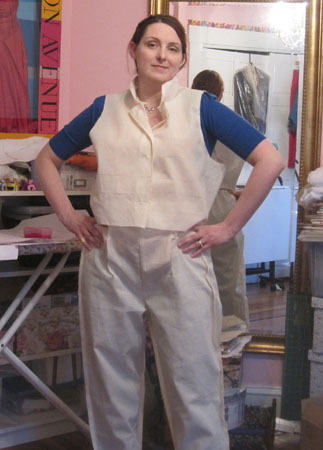 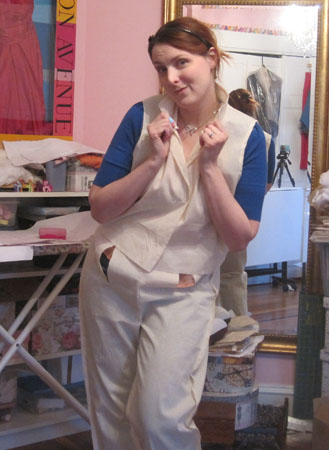 Um. . . I don't even know. Maybe I'm showing off my waistband? Or the fact that I didn't do any of the behind-the-scenes pieces on the pants so I'd be giving you a bit of a show if I weren't fully dressed in modern clothing underneath! 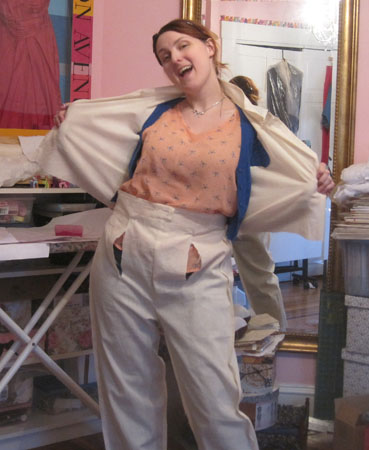 Right. Enough silliness. I'm going to see if I can get the patterns all traced and new mock-ups cut before it's time to bid farewell to this weekend!
Posted by Jenni at 6:48 PM 4 comments:

So there is potentially a change in plans, because it seems possible that my husband may be dragged along accompanying me to the Regency Intensive Dance Weekend! That would mean that it would probably be wise of me to spend my sewing time between now and then crafting his ensemble as opposed to making nice-but-not-necessary enhancements to my own wardrobe!

I already have a shirt and top hat well under way, which is a good start. . . And, I already knew I would eventually put together an entire ensemble for him, which is also good since that means I have already hoarded a nice little collection of fabrics and patterns to start with!

I've been thinking a bit more about the details and time period to shoot for with this ensemble, and I'm calling it "1810s" for now. These two fashion plates (both from 1813) give a good idea of the feel I'm aiming for:

As you see, I'm definitely going the route of long pants. (I just think it's a bad plan to try to introduce my husband to the idea of historic costumes by way of breeches and stockings!) The fabric I have set aside for this is a caramel colored cotton. Probably not the most frequent fabric choice for pants of this era, but the color is good, as I've seen it in multiple paintings and at least one surviving pair of pants from this era.

As for the waistcoats, I have something ridiculous like five silk fabrics hoarded away with the intention of becoming waistcoats! Among these are a waffle-like pattern and a blue stripe that are similar to those in the plates (which is a good part of the reason I chose them to be representative of what I'm aiming for!) The great thing about waistcoats is that they don't take up a ton of fabric, and can completely alter the look of an ensemble that is otherwise using the same garments. My only problem is in choosing which fabric to use first!

So that just leaves the coat, and this one will be a bit of an under-taking, I'm sure! I've done some tailoring before, and even did a coat for Glenn before (though not vintage. . . Well, I guess "Cobra Commander" is a bit vintage, seeing as how he's a 1980s thing!) so I can draw on my experience from those projects. I'm not sure if I'm going to go with the Country Wives pattern or with one of the Laughing Moon patterns instead, or perhaps I'll be pulling bits and pieces from here and there amongst multiple books and patterns to get the right look. . . We'll see! I've got my heart set on having a blue coat, but the only blue wool fabrics I can find are either a totally wrong weave, or much darker a shade than I wanted. I do have one option in my stash, but I am not completely in love with it, so may yet do some shopping around. . .
Posted by Jenni at 5:11 PM 2 comments:

"I shall have to be bought new clothes, for I have nothing fit to wear, and there will be balls and parties every night!"

I've decided that this year, I shall attend the "Regency Intensive Dance Weekend" hosted by the Commonwealth Vintage Dancers. This era for fashion is one of my favorites, and it's also my favorite era of dance out of those I've yet tried. However, I don't really know much about Regency dance. . . So how perfect is it for me to attend a weekend where I get to learn and practice dancing all weekend, plus, get to dress up three times?!?

So of course, I'm assessing my wardrobe and deciding what I'd like to make for this event. Luckily, I have both a wearable ball gown and day dress, so technically, I have all that I need to survive the weekend. But where's the fun in just wearing the same old things without at least adding a little something new here and there, right? Here are my current wardrobe plans:

Ball #1: New dress! Will be extremely simple style, using the pattern I used for my dotted Swiss dress with slight variation, and of a metallic striped cotton. Easy-peasy!

Ball #2: The Wicked Puffy Dress again! Because I think this might be my favorite thing I've yet made, and I want to wear it as much as possible. So I'll get the rest of the trimmings on in time for this event!

Day Event: TBD. I have my dotted Swiss dress which, if nothing else, is a great back-up option. But I'm contemplating a "something new" for this part of the weekend. Just not sure if I want to invest my time in a new ensemble (maybe finish my two-piece dress?) or maybe make some fun new accessories instead. . . If I am smart, I will instead focus my efforts on a Pelisse, since it's likely to still be chilly at this time of year and I get cold very easily. So, I'll have to mull this over and see what I'm most in the mood to make! ;)

So, stay tuned for some Regency sewing adventures! :)
Posted by Jenni at 6:31 PM No comments: