I absolutely love things that are in miniature, and am a big collector of the historical American Girl dolls (and have been since they first came out!) So, when I got asked by a fellow doll-collecting Instagrammer if I had interest in combining my love for weaving and dolls and weave a modified reproduction of Kirsten’s long-retired St. Lucia tray cloth, I said yes!

Because I had only just dipped my toe into the world of using double heddles, I decided that I would first weave a sample. This would give me a good idea of exactly the size heddle, yarn, etc. that I wanted to use, and I figured it would not be a waste because I could make a little pair of placemats for my own Kirsten.

The warp for this project was, of course, very small! My Mom had a little wooden dish rack she’d brought by for repurposing into something else, but when I saw it, I thought, mini warping board! 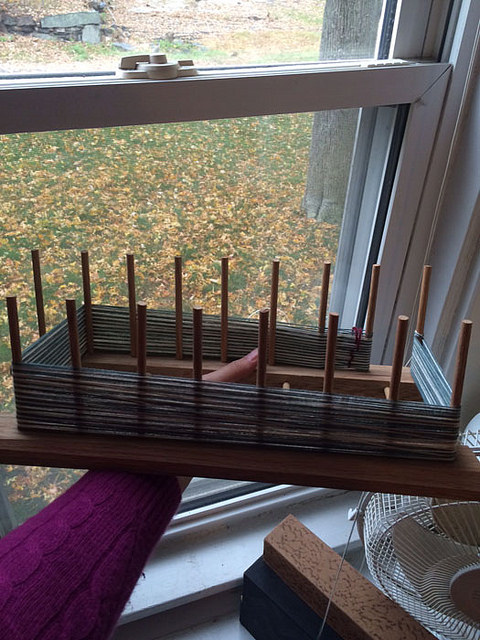 I used some Valley Yarns 8/2 Unmercerized Cotton that I’d bought them a few months earlier during one of our Brimfield antiquing adventures, in which I dragged everyone to Webs (and have no regrets because Webs is yarn heaven, people! Also, the staff are amazing, knowledgeable, and super helpful!) These colors are “Natural” and “Sagebrush.” 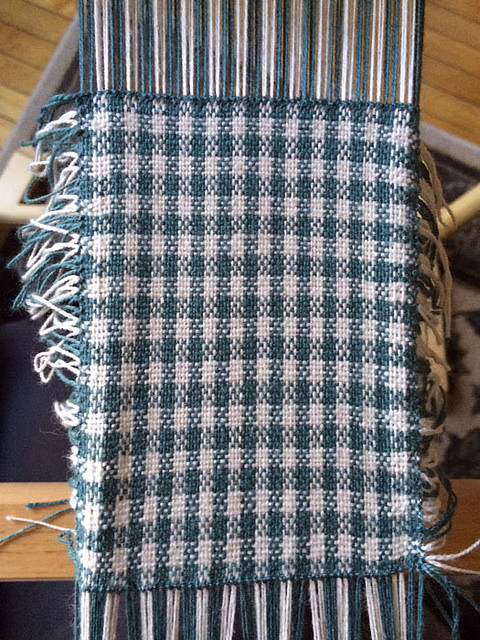 This was my first adventure in making something where I wanted a fringe on all four sides. The logical thing to do seemed to be to just leave extra yarn loops on each side, and then I figured I’d hem stitch all four sides. (I really am obsessed with this hem stitching thing! It’s just so tidy and perfect, and I love it!) The resulting placemats are super cute! 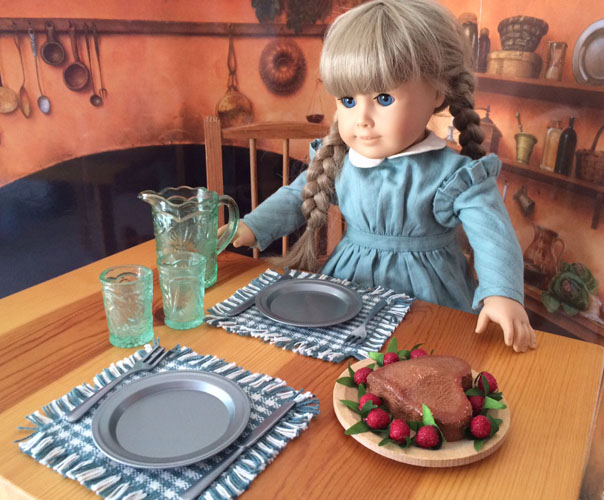 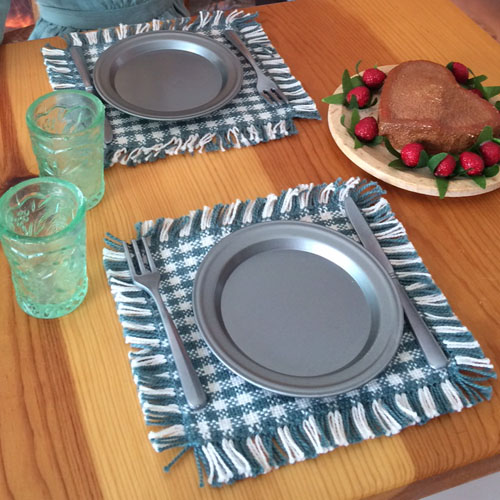 I was really happy with them, but thought I could do a little bit more tweaking to the sett, and since I was waiting for back-ordered yarn anyhow, I decided to have another go. I used a slightly different sett this time, and the same yarn, but swapped out the green for the “Peaches ‘n Cream” color. 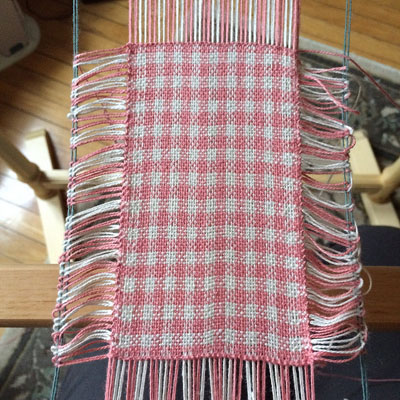 With the green pair, controlling those weft-wise loops was a bit of a fiasco, so this time, I decided to try adding a few ends in waste yarn at approximately where I wanted the loops to end. This worked brilliantly! It really made the weaving fly by. In no time at all, I had another pair of placemats! 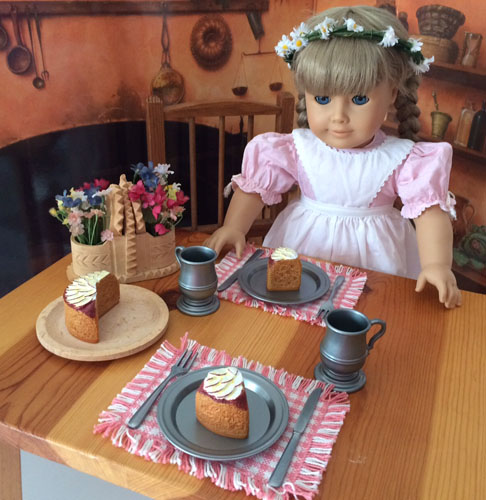 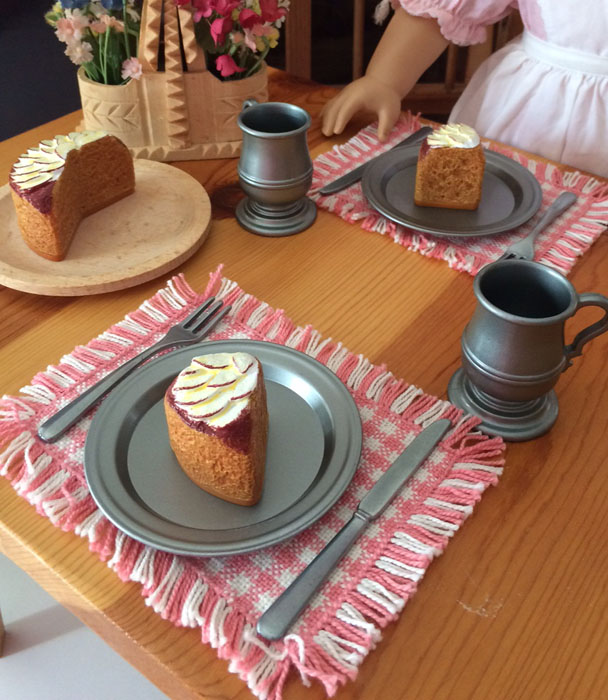 By then, I was ready to begin the actual red and white cloths. However, Webs was out of the right color of red that I needed, so I had to go hunting. I decided to try Halcyon Yarn's Homestead 8/2 cotton. I found it to be very comparable to the Valley Yarns cotton I'd been using, though perhaps a hair finer. The colors I used were Light Red 29, and Bleached White. 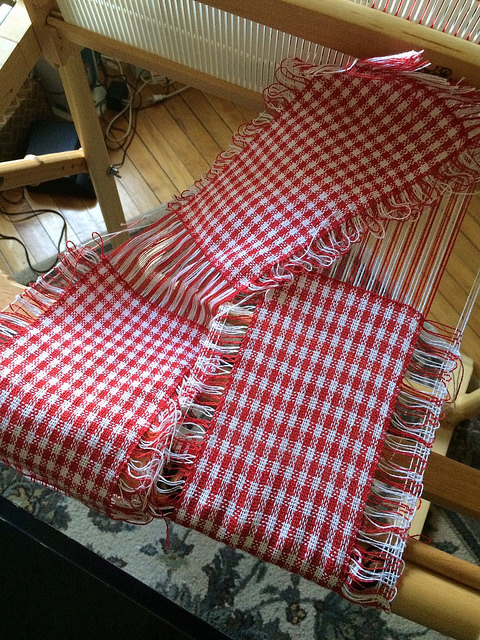 I ended up making three tray cloths for the lady who inspired this adventure, and her two daughters. They are quite a bit larger than Kirsten’s original tray cloth, per her request, since her tray was also larger than the original. When I finished the three cloths for her, I still had quite a bit of warp left, so I went ahead and made myself a tray cloth as well, but with dimensions closer to the original. Now I just need to come up with some sort of tray to put it on! 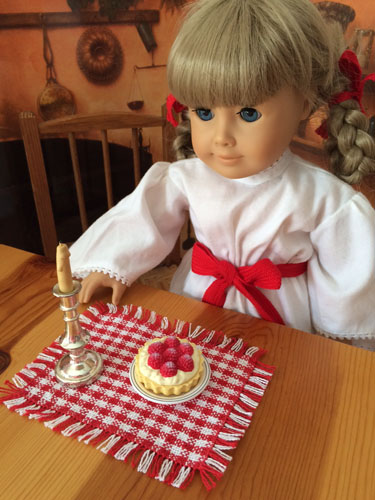 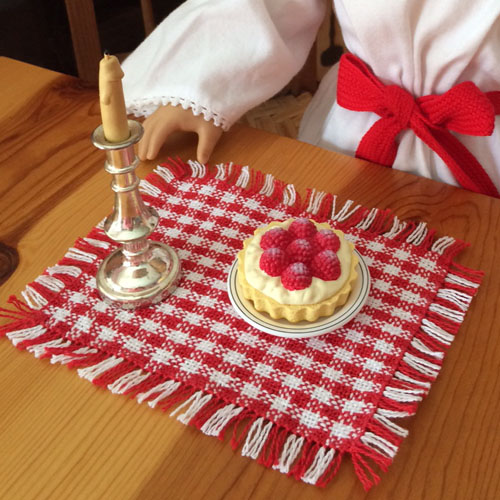