My shellac finally arrived yesterday, and as I was working from home and knew it would arrive that day, I started my work day quite early so that I could do the first coat at lunch break, the second immediately after work, and then additional coats throughout the evening as needed. But first, it had to come off the block! 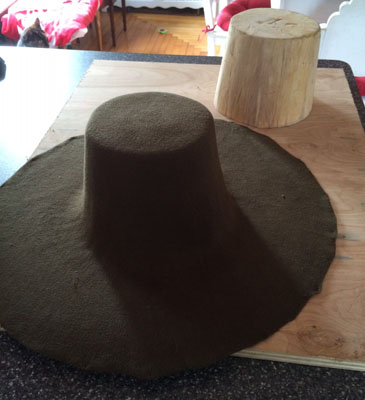 Next, I moved the adventure outdoors and gave the hat its first coat of shellac: 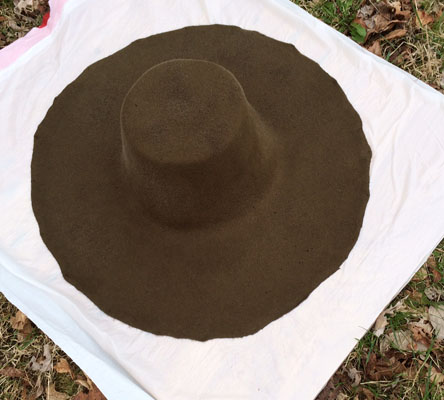 I did so many coats! My last one, it was almost totally dark out! I was using a pre-mixed shellac/denatured alcohol that came in a spray bottle, ready to go. I won't go this route again because even with so many generous coats, it still is too floppy, and worse, it caused white blotches which you'll see in some of the pictures below. So, for the next time, I'm going to go with the more traditional brush-on type! And for this hat. . . Well, I'm out of time until I get back from Virginia on Sunday! But post-Fort Fred, I'll try to remove those blotches, and then try out the brush-on mixture on this hat (before I move on to my really nice quality black capeline!)

But, pretending I'm done with stiffening, and having trimmed the edges to be nice and smooth, added a hat band and some temporary trimmings, here is my hat: 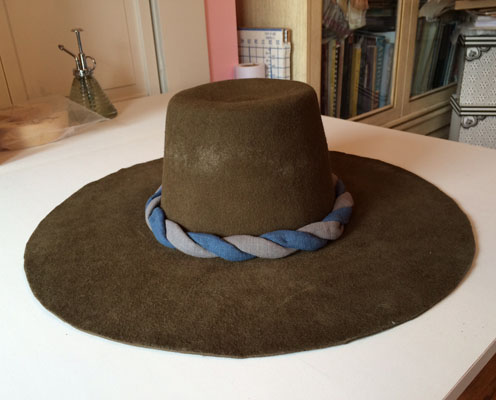 And, the best I could do to get a picture of it on since nobody else is here and I'm not good at selfies: 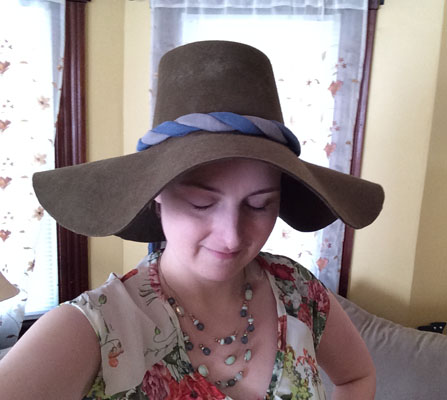 So far. . . I love it! I think I might cut back the brim a bit more, but I'm going to wait until I've finished stiffening to make a final judgement call on that. Also, clearly that's not a period-correct ensemble for this hat! Another post-Fort-Fred-trip project. ;)

In other news, I had so much fun with making this that I forsee the possibility of becoming a bit of a felt hat making addict! I'm already coming up with ideas of all kinds of hats for various eras. . . Although, the trick will be coming up with appropriate hat blocks!
Posted by Jenni at 9:44 AM